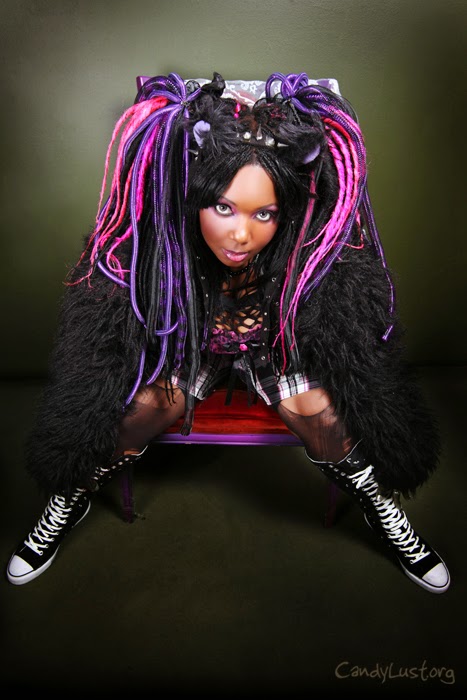 ThaGataNegrra is a Newark, NJ-based alternative hip-hop artist who specializes in innovative lyrics, cleverly twisted metaphors and a funky start-stop delivery that nails the listener from the word go; her rhyme arsenal runs the gamut from danceable ear candy to mind-searing aggression. Her distinct flow, catlike persona, and penchant for the odd not only earned GATA her feline namesake and the tag of the world's premier PunkRhyma™ , but made her a force that is undeniable.
GATA is painted as a manga/anime character of the hip-hop spectrum; her performances highlight this by featuring cosplay and visual kei style. Her musical style was colorfully described as “the bastard child of Hello Kitty and Eminem”, “infectious”, “honest”, and “full-bottle, in-your-face chick-hop”. Her influences range from Golden Era hip-hop and punk to dance and new wave. She is a founding member of The Alliance for Alternative and Eclectic Hip-Hop (AAEHH). She has been showcased at Code of tha Cuts: Project B-Girl at Vans Warped Tour, the ING NYC Marathon, and her music was included in the second season of the controversial, groundbreaking hit Hulu show "East Los High".
ThaGataNegrra's debut CD, GATA City, is being re-released this fall for 3 Miles Entertainment; but is also available at Bandcamp.com.